To celebrate our 80th Anniversary a Garden Party was held on 7th July 2019. We were delighted by the number of people who attended.

The opening ceremony was conducted by Watton Town Crier, Mike Wabe, followed by a welcoming speech by Andrew Fell, Headteacher.

Visitors were entertained by the School Jazz Band , Rock Band and choir, led by Mr Jay, who put on a great show once again and were a credit to the school.

We were honoured to welcome back three former Headteachers, Mr Nolan Newbury, Mr Peter Whear and Mr Aron Whiles who took part in the tree planting ceremony in the Memorial Garden. 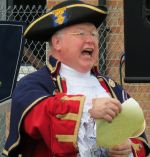 They also cut the commemorative cake which was made by Michelle Beckley, a member of our catering staff.

A variety of well attended stalls included a tombola, welly wanging, skittles, lucky nails and a play area for toddlers. Burgers and hotdogs were provided by Banham Butchers and the Ox and Plough provided the licensed bar. It was a day to remember.